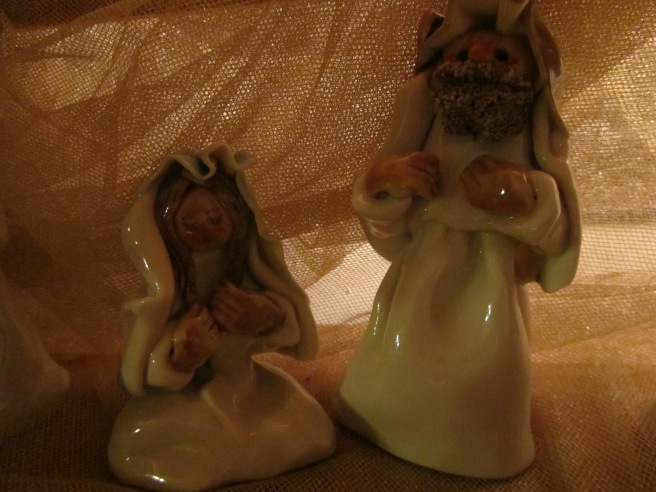 Yes, and every night will end 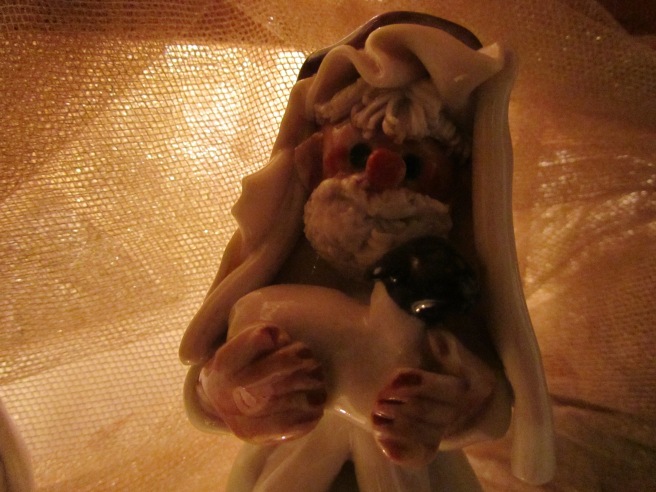 And every day will start

With a grateful prayer 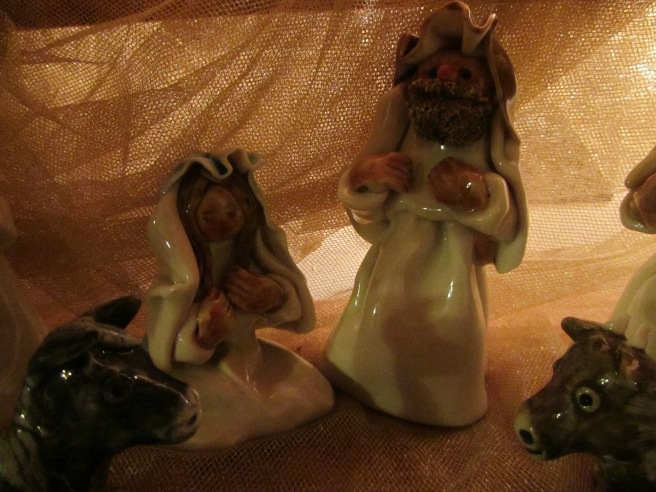 And a thankful heart… 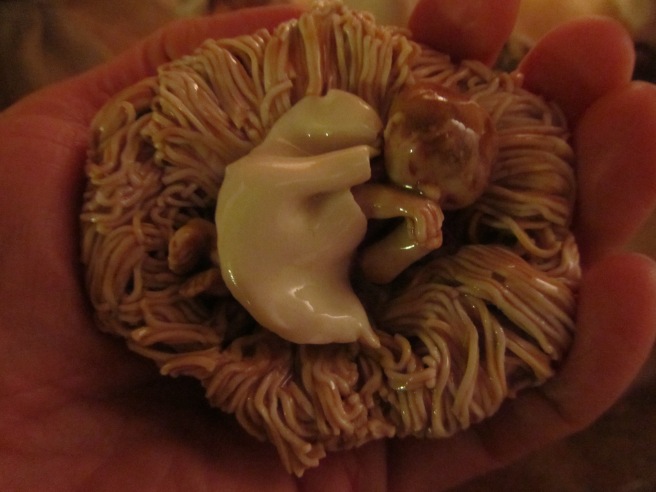 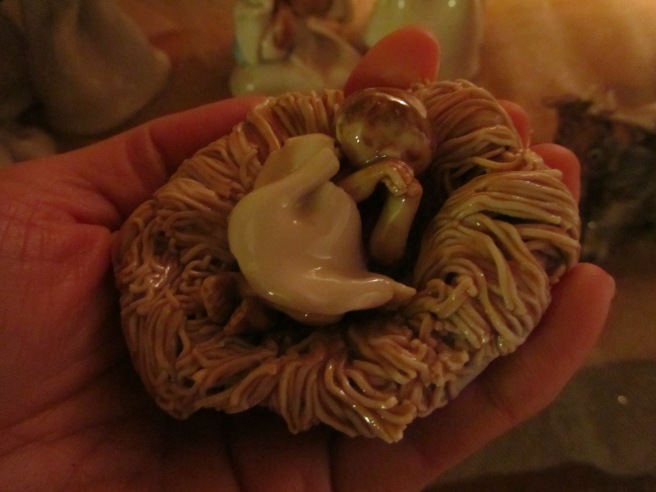 …With a loving guarantee 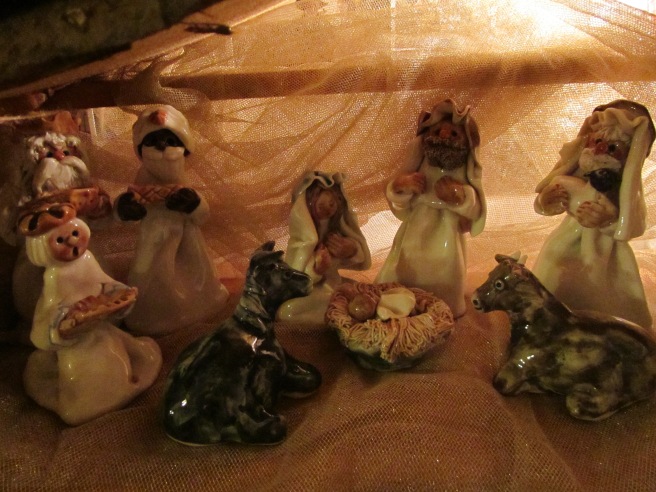 That even if we part

I will hold you close in a grateful heart.

I’m still feeling a bit hot and snotty. You could, if the desire was pressing, toast marshmallows on the glow from my right ear.  I need to thank my kind followers for the wonderful home remedy suggestions. Panama rum and honey is calling my name but I’m going to steer clear of the flat 7UP!

Very little was achieved over the weekend.

I’m still wading through Middlemarch. I’m on page 195. This must be the longest I’ve been stuck in one book since I took it upon myself to read The Children’s Bible at age 8. I had the measles and I was out of school for a month. I recall being mesmerised by a double page spread of Moses parting the red sea.

George Eliot might have done well to have considered some full-colour illustrations, perhaps a fashion plate or two? It would also have been helpful if she had stuck to the flipping story instead of wandering off on endless, rambling tangents. It strikes me that this novel may be all too accurate in it’s portrayal of small town life. Nothing much happens in Middlemarch. I’m struggling but not willing to give up just yet.

In contrast, Middle Girl and I are storming through The Gilmore Girls. Five episodes into season two and it’s still a real treat having something that we are looking forward to doing together.  It has to be said; nothing much happens in Star’s Hollow either. Teenage Son claims despair at the on-going marathon although he regularly skulks in to join us. His initial disparagement of ‘ultimate cheese’ has been down-graded to ‘not even cheese, it’s vanilla yogurt’.

He has a point. It is very mild. It’s not hilarious. It’s not terrifying. It’s not even mildly addictive. It’s simply gentle entertainment and I like it. I like the quirky add-ons; the town troubadour and the ever-changing face of Emily’s maid. I like the witty literary references. I like that the heroine, Rory, is kind to her friends and polite to her neighbours. I like that she is proud of her achievements and ambitious for her future.  How much more inspiring a teenage role model she is than dreary old Dorothea Brooke who begs her middle-aged husband to allow her to tidy his files. AAAAh, I don’t like her at all!!

I also like that I can knit, scroll Pinterest and watch The Gilmore Girls all at the same time. It makes me feel productive.

Lorelai, the elder, still gets my goat but that’s a story for another day.

I need to get back to gently warming whiskey and pouring rosehip oil into my ear. Or vice versa, whichever works.

PS. Can anybody tell me where the good people at WordPress have hidden the spellcheck button?

I was totally besotted with Michael J. Fox in my early teens (after Bruce Boxleitner and before Ethan Hawke). If I had to name just one celebrity crush it would be him. I must have watched Teenwolf a dozen times.

It’s a blast seeing all the Back To The Future nostalgia sweeping across the internet today.

Michael J. Fox and Christopher Lloyd feature in this clever Toyota Ad. I have to admit that it made me smile. Go on, take a look, it’s cute.

Queensland Police have taken to their hoverboards. Brilliant!

Spotify have a 1985 playlist that bears a shocking resemblance to my own record collection.

I was fourteen when I first saw Back To The Future. Fourteen is considered to be a ‘magical age’ when we develop our own taste in music and form our cultural identity. It’s certainly true that songs and movies from ’85 and ’86 hold a strong emotional significance for me. I remember them better and they have more power to pull me back in time than anything from the ’90s.

Husband and I have YouTube ’80s nights where we push back the furniture and he does his Kevin Bacon dance and I wish, again, for Kelly McGillis’s hair (and Porsche). The kids cover their eyes in horror and laugh hysterically. Highly recommend it !

Ever wondered what happened to Biff? This is funny.

There was only one question on everyone’s lips at the school gate this morning:

If you are lucky enough to live within the catchment area of the BBC (we are sort of BBC hinterland here) you will know that I mean The Great British Bake-Off Final. There is something special happening when the winner of a British cake-making competition make headlines in the Irish news.

As part of the build up to Bake-Off fever Middle Girl made her own showstopper carrot cake for us. While she was busy with that, at the other end of the kitchen table, Small and Teenage Girls set up a plasticine workshop.

This chocolate doughnut is the size of my baby fingernail.

It’s filled with chocolate sauce. I think it looks like Muppet eyes. 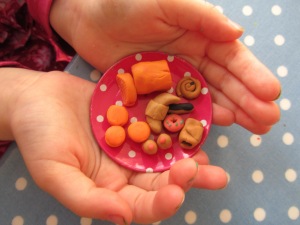 Back to real cake: We love the carrot cake recipe from Lilly Higgins’ gorgeous book, Make Bake Love. EDIT Friday 9th October. Lilly Higgins has kindly given permission to share her excellent Carrot Cake recipe. You can find it here.

We make our own cheaty cream cheese which really is the icing on the cake. I line a nylon sieve with a clean, fine teatowel and pour a 1000g tub of Greek-style yogurt into it.

I let that drain overnight (4/5 hours will do). The liquid that drains off is whey and can be used to make bread. The strained yogurt (labneh) tastes lighter and cleaner than shop-bought cream cheese. It’s much cheaper too.

Middle Girl added 150g of icing sugar and the zest of an orange (lime is great too) to 600g of labneh. You have to try this, it is sensational!  You don’t, strictly speaking, need a cake to put it on! The licking of this bowl is the most fought over. OK, it’s not exactly a health food but a little bit of this cake will do you a power of good. I’m very proud of my middle-sized baker.

You may recall that the proceeds of a random act of kindness (more about that here) went towards the purchase of Us by David Nicholls (thoughts on Us, here) and The Miniaturist by Jessie Burton.

The Miniaturist came highly recommended by a friend whose opinion I trust.

It’s an absorbing and compelling read. The historical detail of seventeenth century Amsterdam is fascinating. The characters are fully drawn and likeable. The plot twists and surprises to the very end. Despite all of this, I was a little disappointed. I was left feeling dumb because I just didn’t get the point of the miniaturist in the plot. I thought that the book had a good enough story without the voodoo angle. Maybe I’m just missing something or getting too old for magic. (Photo credit to the Small Girl.)

The Miniaturist reminded me of another book set on the Herengracht, fifty years earlier, which I read in 2000. Tulip Fever by Deborah Moggach is a fast-paced fable, warning of the dangers of lust, greed and ambition.

I read it again and loved it again. It’s short and has super-short chapters which shift perspective at a dizzy-ing rate. For pace and suspense, Deborah Moggach could give Dan Brown a run for his money. It includes illustrations by Dutch masters (where Us left me to do my own googling of, bizarrely, the same pictures). If it was possible to plot easy-to-read versus satisfying, this book would surely come out on top. The plot, in some ways, is even more far-fetched than that of The Miniaturist but, to me, it made more sense.

A movie of Tulip Fever is coming soon. A script by Tom Stoppard and a role for Judi Dench bode well. Cressida Bonas, best known as Prince Harry’s Ex, has a part and apparently Harry Styles was offered a role, more here. I am intrigued.

A bit of plant mania took hold here in sultanabunland today when the mystery giant poppy finally opened. My goodness, what an opening! 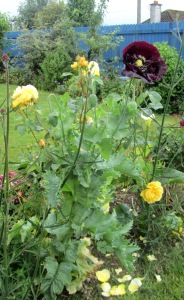 We went for a walk around Fota Gardens last autumn and I might have stolen a couple of poppy seed-heads (no telling). In March, I found the envelope labelled ‘mystery seeds from Fota’ and I just scattered them willy-nilly around the new perennial border. 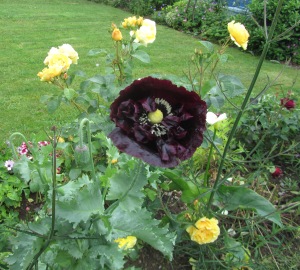 I suppose it’s more purple than black but more beautiful for that. It reminds me of the blue roses in The Glass Menagerie. Pleurosis poppy?

That is my favourite Italian word. Procrastinabilita. To procrastinate, as you know, means to put off until tomorrow something which ought to be tackled today (pro meaning towards and cras meaning tomorrow). La procrastinabilita is a statement of just how put off-able the task is. For example, this pile if ironing is reaching the very limit (il limito massimo) of procrastinabilita.

Italians also talk about la non-procrastinabilita. The un-put-off-able-ness. You might like to use this word when discussing personal hygiene with teenagers.
I make a very lazy effort to refresh my Italian by following a couple of nice food blogs (this and this) but I picked up this word from my favourite TV detective. Introducing, Il bellissimo, Commissario Montalbano.

Luca Zingaretti plays Salvo Montalbano, an endearing, Sicilian detective who prefers to dine alone so that he can really savour his food (I like that!). Some of the minor characters are a bit dodgy but the show has an authentic atmosphere which is charming. It has been running on BBC4 on Friday nights (Italian with English subtitles) but it’s also available on DVD.
I’ve only read one of the original books by Andrea Camilleri, The Scent Of The Night. It was an altogether classier affair than the show with wry humour and beautifully evocative writing. Here’s a small flavour;
‘The north wind was blowing so icy and insistent that instead of brightening the colours of the morning as it had always done, it was carrying them away, erasing them by half, leaving behind only after-images, or rather faint blotches of the sort made by a Sunday water-colourist.’ 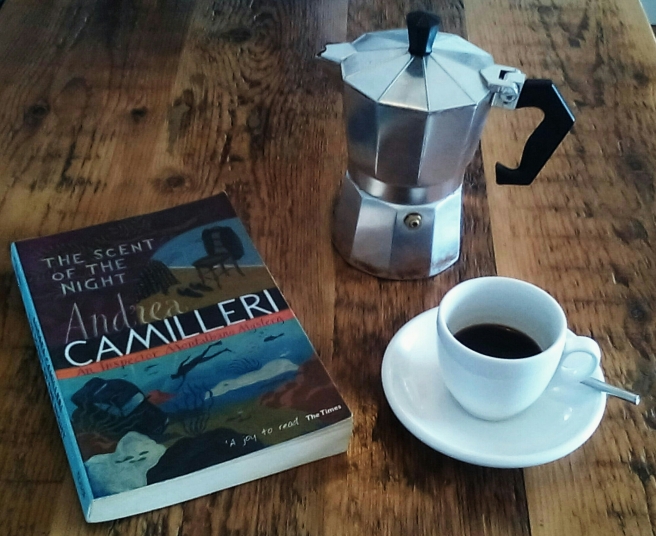 Montalbano is the real deal; dark and strong and very satisfying.