Long, long ago, back in the mists of the last millenium, the restaurant at the Crawford Gallery used to stay open late for dinner and that is where he brought me to celebrate our first St. Valentine’s Day together.

It was a very special place; Myrtle Allen and her daughter Fern were running it at that time. They had the Ballymaloe trick (they invented it, of course) of combining faded grandeur with homeliness so that you felt you belonged. Can you imagine? Two starving, grubby students, scrubbed up and loved up, playing grown-ups and acting posh. I have no idea to this day how he paid the bill. He may have left a portion of his liver behind.

It was magical, everything about that night, from beginning to end. There were masses of candles on the windowsills, reflecting in those long windows, and a harpist strumming away in the corner. As seduction scenes go, he was on to a winner.

We ate Dover Sole, stuffed with salmon and served with champagne sauce. It was, without a shadow of a doubt, the very best dish I had ever eaten and indeed, I can’t think of a thing that has surpassed it. Honest to God, I was in ecstasy.

For dessert we had Coeurs à la Crème, something I have never seen on a menu before or since. They had me at à la Crème. It was sublime.

We had, by that date, broken up more than once. In fact, I believe I had sent him packing no fewer than six, SIX, times! But, he won in the end. Well played, mon amour!

There was no going back from the Coeurs à la Crème.

A couple of months later, for my birthday, we went to see the the RSC production of Les Liaisons Dangereuses at Cork Opera House. Oh, it was wonderful. I adored it. The two nights remain associated in my brain, a tangle of memories from a time of golden, libidinous, joyful adventure.

When I sat down to choose a book for my February edition of Cooking the Books on Bookwitty, there was only one possibility. It was beyond my control. 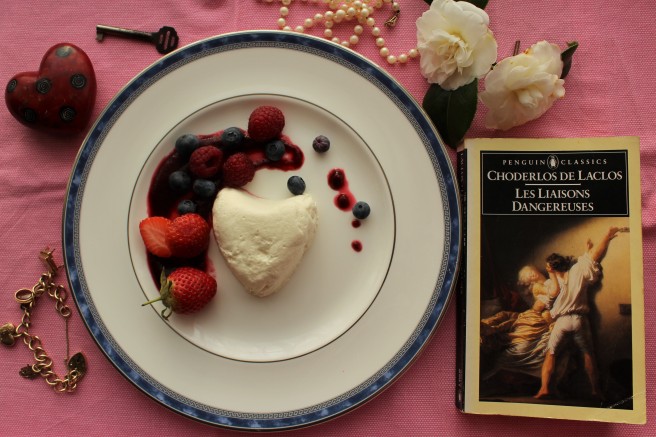 I scoured the internet and found the moulds for Coeurs à la Crème here. I referred to my trusted Ballymaloe Cookery Course for Myrtle’s recipe but it was for four servings which seems remarkably silly. I cut it down to two and tweaked it a little, reducing the amount of cream and adding vanilla. I’ve lost count of how many Coeurs à la Crème I’ve eaten in the last month but it has been fun, like playing grown-up and acting posh all over again.

Click here to read my review of Les Liaisons Dangereuses and my slightly risqué recipe for Coeurs à la Crème.

For anyone else who believes that Rickman owns the role of Valmont, here is a precious snippet of the master on stage: