Make time in your life for this tiny book. You won’t regret it.

You might remember the film (released 1987). Anthony Hopkins played the ‘antiquarian book-seller’, Frank Doel, corresponding with Anne Bancoft’s portrayal of Helene Hanff, the bibliophile New Yorker. The film was based on a two-man play. The play was based on the book. 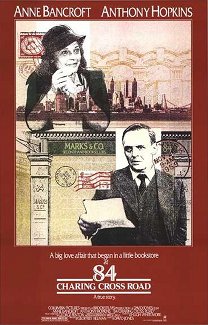 The book is only ninety-five pages and is comprised entirely of the letters exchanged, over twenty years, between the real Ms. Hanff and Marks & Co. Booksellers.

Frank Doel is polite, correct, reliable, just a bit stuffy. Helene Hanff is brash, outspoken and incredibly well-read. The clash of these two is, by turns, hilarious and heart-breaking. I genuinely loved every word.

I believe that I am more myself in a letter. I can’t deviate mid-sentence as I perceive a dismayed or incredulous facial expression. I’m locked in to my opinion regardless of what you, the reader, are going to think of it at some time in the future. I have an uncanny knack for saying the wrong thing, not saying what I mean and generally getting it wrong in conversation. By letter I have time to edit myself and get it right, or at least better. By letter I have time to be my best self.

I love reading letters. I love the glimpse inside a moment in someone else’s head.

The letters in this book might have been ordinary business letters but that the writers revealed their true selves. Their funny, generous, smart, best selves.

If you only read one book this year, please, let 84 Charing Cross Road be the one.

PS. I completely forgot to mention that this edition included the bonus of Helene Hanff’s later book, The Duchess Of Bloomsbury. This is Hanff’s diary of her trip to London after the publication of 84 Charing Cross Road. She records, in her throaty New York voice, her mixed emotions at finally seeing London and meeting her correspondents. Whilst I enjoyed reading it, I found it somewhat of an anti-climax. Following the immediacy of the letters, her tone in the diary is a tad more self-conscious. Presumably, she knew or hoped that it would be published. Perhaps the mark of a great writer is the ability to completely ignore the possibility of publication. It’s a pleasant enough read but lacks Frank’s steadying interjections.