This room was my favourite room from the very first time we viewed the house. On that first, fateful day the auctioneer almost broke the half-rotten front door as he pushed it open against a heap of junk mail on the mat. 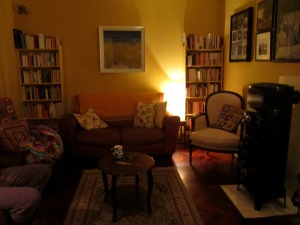 The original hall was less than three feet wide but made narrower still by the stacks of old video cassettes piled against the walls.

The first door on the left led into this small, south-facing sitting-room. Had it not, I would probably have fled without a second glance at the rest. 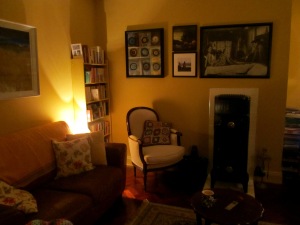 The house was worse than derelict. It was a wreck. Not another soul wanted it and everybody, EVERYBODY told us we were ‘very brave’.

We weren’t brave; we were nuts.

This is the only room we didn’t structurally change. We demolished half the house. In the depths of the freezing winter of 2010, all that stood in the ice and snow were three perimeter walls and this room. Husband and I huddled in here with a flask of coffee and a big dream. 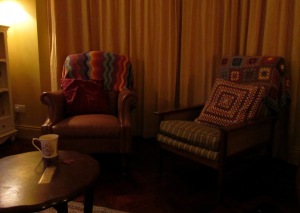 The Irish Rugby Team didn’t feature in my vision but they seem to have had a dominant role in Husband’s dream. The TV in the corner might not scream ‘library’ but, if it wasn’t there, I would sit in this room alone. As soon as Husband plugged in the TV he took his seat and couldn’t be shifted, blog or no blog. I hope you like his knees.

The stove is our pride and joy. As we ran out of money and faced into the winter of 2011, we chose the stove over bookshelves. It’s Danish, dates from the 1930’s and heats our entire house. The man who sold it to us also supplied all the stoves in the Harry Potter movies. You can take a look at his lovely shop here.

This painting, a wedding present from Husband’s Godfather, was the starting point for the colour scheme.

I splashed out on this tablecloth in a molto-fancy linen shop in Italy.

This blanket is proof that it is possible to breastfeed, crochet and watch The Wire box set simultaneously. It’s the Attic24 Neat Ripple pattern.

My youngest sister gave me this photo. It’s the Marriage Rock in Cape Clear where we got engaged. Can you see the hole in the rock on the left? I put my hand through that (yes, it was tight) and Husband put a ring on it. We drank a bottle of lukewarm champagne and stumbled across three miles of island terrain to the cosiness of out two-man tent.

You can see that there are still stacks of books on the stairs. This room isn’t finished yet but at least it feels ‘done’. I have to say, I love it!

Organising the books was an enormous pleasure. I recalled happy memories of when and where I read them. I read messages on flyleaves that made me smile. There are books here that I received as gifts thirty years ago. There is a book I won in a tombola in Venice (Mark Twain in Italian). The reading of the book is only half the pleasure in it.

And which, you may ask, is my favourite? The only one I can’t live without?

Why, the next one, of course…